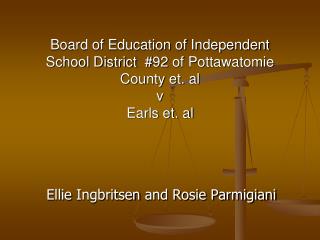 Ellie Ingbritsen and Rosie Parmigiani - Board of education of independent school district #92 of pottawatomie county et.

Stefano Parmigiani - . department of neuroscience university of parma co-director of the international school of

Our Advert Proposal By Lucy Buckley, Ellie Gardiner and Rosie Tetu - . the product the product we have chosen to

Dr. Parmigiani, - I thought i'd send you a message and let you know where i've ended up since college…  … as you

Rugby and Rosie - . rugby and rosie by robin sas. objectives:. you will: recognize base or root words with the suffix

Rosie and Tuskegee: - . the experiences of u.s. women and african-americans in world war ii. what advantages or obstacles

Rosie Patterson - . 2/6/12 morbidity . “the raven”. edgar allan poe i like the poem because the words made me feel

Miss Rosie - . by lucille clifton analyzed by lucas reincke and trevor guntren. background. originated from the book of

Rosie and Sylvester’ IPO - . our first offering of 16 cards for the public. sylvester blogs at:.

BY LUKE,CLAIRE,ELLIE AND AFFAN. - Our castle. by luke,claire,ellie and affan. plan of castle. who was in the group

(Ellie Chaffee and Katie Farrand) - The creatures on planet bob. written and illustrated by bob chaffee and bob farrand.