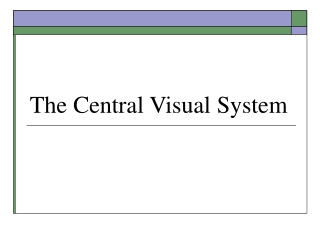 The Central Visual System. Transduction. Photoreceptors release the neurotransmitter glutamate (glu) when depolarized. Depolarized in the dark. Hyperpolarized by light. Only ganglion cells have action potentials. The Central Nervous System - . by: chase lewis. the two main parts of the central nervous system are the brain and spinal

The Visual System: From Eye to Cortex - . ch. 6. outline. the eye the retina visual transduction by rhodopsin from retina

Visual System - . http://www.cis.rit.edu. much of the text material is from, “principles of anatomy and physiology

The Visual System - . general plan for visual system material: how the visual input is received and transduced at the

What is your nervous system? - . do you see what i see?. your visual system. our eyes tells our brains……. where. what