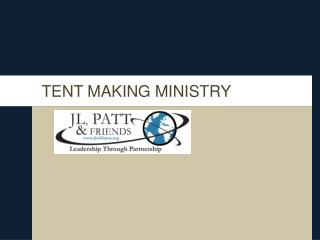 TENT MAKING MINISTRY. INTRODUCTION. The Apostle Paul set us an example of being a “Tent-Making Minister. ” It was his normal – not his exceptional – pattern of ministry ;.

Session 1: Music as a Corps Music Ministry - . why salvation army music making?. purpose what do you consider to be the

Making an Eco-column - . this presentation demonstrates the steps for setting up an eco-column. 1. cut bottom off of 2

Ministry of Health Department of Planning and Finance - . update on the implementation of soi milestones update on the

Crying in the Wilderness Ministry Mission &amp; Vision - Motto “people do not care how much you know until they

Christology 9 The Future Ministry of Christ - . series: critical doctrine the rapture of the church. christology. the

Making Disciples - . tony hoffman thoffman@flbaptist.org. what is a disciple?. what do we want to do with people?. mt.

Pioneer Ministry - +graham cray. pioneer ministry. new context - new gift mix. the gifts he gave were that some would be

TENT MAKING IN MINISTRY - . introduction. tent making: it is a missiological term for paul’s model of missionary

ANGLICAN Youth ministry strategy - . jonathan kemp, ycf / mec / adb. step in, step out. are we awake?. what if…. what

REPUBLIC OF KENYA MINISTRY OF FINANCE PROJECT MONITORING – THE KENYAN EXPERIENCE (e-ProMIS) - . outline of the