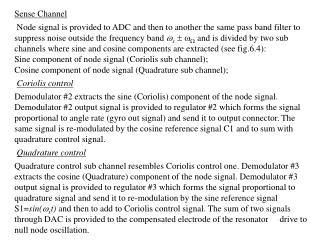 Sense Channel  Node signal is provided to ADC and then to another the same pass band filter to suppress noise outside the frequency band  x    and is divided by two sub channels where sine and cosine components are extracted (see fig.6.4):

Television Idents - . tv ident :. a visual image e mployed by television programs and channels to give a sense of