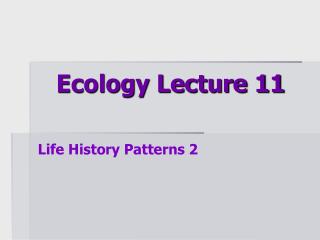 Ecology Lecture 11. Life History Patterns 2. Overview. A mating system includes how members of a particular species (or population) choose and bond with mates how many mates per individual how parental care (if it occurs) takes place. Types of mating systems LECTURE 11 POPULATION ECOLOGY - . life tables. a maximum age an individual can live. each species has a characteristic

Ecology Lecture I - . ecology standards : 6a ~ students know biodiversity is the sum total of different kinds of

Ecology Lecture 3 - . ralph kirby. what is soil. before life invaded the land from the sea, there was probably little

Lecture 4 Ecology - . ralph kirby. photosynthesis. all life on earth is carbon based co 2 was the major form of free

LECTURE 15 BEHAVIORAL ECOLOGY - . the selfish herd. some animals live in groups simply to ‘use’ others as a shield

Lecture 6 Population Ecology - . eben goodale college of forestry, guangxi university. so what did you think about

Lecture 11 - . introduction to probability. which one would you be most likely to play. consider the following three

Lecture 11 - . matching. a set of edges which do not share a vertex is a matching. application: wireless networks may

Lecture 11 - . sharing personal narratives. review of lecture 10. in lecture 10, we learnt how to recognize a narrative