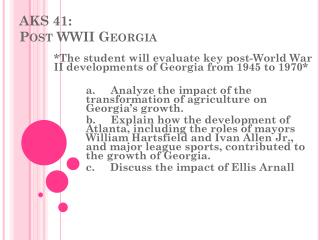 AKS 41: Post WWII Georgia. *The student will evaluate key post-World War II developments of Georgia from 1945 to 1970* a. Analyze the impact of the transformation of agriculture on Georgia’s growth.

A.f. insert - Is there an insert?. a.f. insert. each organism has a specific set of restriction enzymes. eco ri from e

Important Events in World History Post WWII - . ****the middle east****. the russians in afghanistan. event #1. the

WWII Battle of Stalingrad - . by: jacob stieritz. vs. history why did the battle of stalingrad start?. the battle for s

Georgia during World War I - . ss8h7d:. give reasons for world war i and describe georgia’s

World War One in Summary - . a few key battles and events that you should be familiar with:. timeline of key events 1914

The Post WWII World - . part i containing communism. the cold war. what was it &amp; why did it happen? part i. what