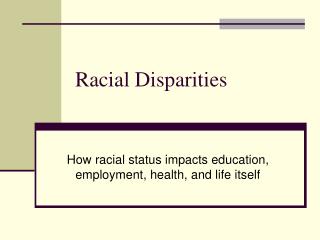 Racial Disparities. How racial status impacts education, employment, health, and life itself. Race question (1990 Census). 7. Is this person of Spanish/Hispanic origin? No Yes: Circle one of the following: Mexican, Puerto Rican, Cuban, Other. Race question (2000 Census). STUDYING WHILE BLACK: WHAT STUDENT NARRATIVES CAN TEACH US ABOUT RACIAL DISPARITIES IN ACHIEVEMENT - . mekides mezgebu