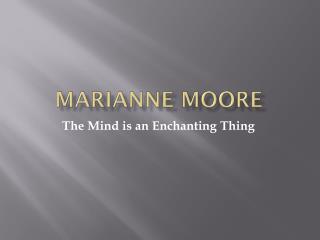 Marianne Moore. The Mind is an Enchanting Thing . Biography.

Read this very famous poem by Langston Hughes about suicide . - “in a poem the words should be as pleasing to the ear

Henry moore - . shriya parekh 10.1. biography. carreer. when you write about the victorian style add an image to explain.

“Originality is a by-product of sincerity” ~ Marianne Moore - . my life. sarah wolfe escamilla. my life…. born and

marianne Moore - “i see no reason for calling my work poetry except that there is no category in which to put it.” -

Wallace Stevens - . by: katie geairns and allycia rockwell. a biography. wallace stevens was born in reading,

Introduction to Poetry - . “in a poem the words should be as pleasing to the ear as the meaning is to the mind.” --

Henry Moore - . by. jay nielsen. life of henry moore. henry moore was born in july 1898 in castleford, yorkshire, died in