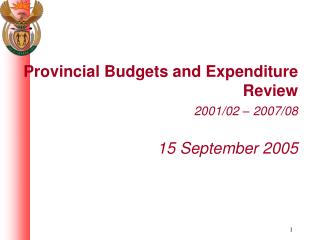 Provincial Budgets and Expenditure Review 2001/02 – 2007/08 15 September 2005. Prov. Budget and Exp Review (1). Unlike previous reviews, focuses only on provincial finances and performance Scope of LG has grown substantially over the years and warrants a separate review

Mestek Board of Directors September 8, 2007 - . achieving profitability in cleveland (plus a quick look at maine, beijing

M4 Costs &amp; Budgets - . analyse the reasons why costs need to be controlled to budget. m4 budgets. from the

CET CERN Expenditure Tracking - . introduction to cet and basic financial concepts june 2007 it-ais-mds. what do you

Changes in RDA - . changes in the rules for descriptive cataloging by judy knop. timeline . chapters 1-2, 4-5 reviewed