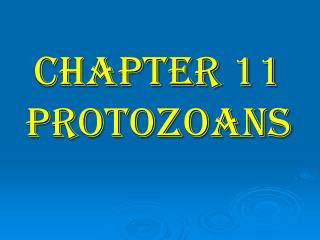 CHAPTER 11 PROTOZOANS. Protozoa are a diverse assemblage with mixed affinities. a. They lack a cell wall. b. They have at least one motile stage in the life cycle. c. Most ingest their food. Biological Contributions

Chapter 2 - . topics covered. positions of microorganisms in the “tree of life” environments with important microbial

Kingdom Protista : The Protozoans - . protozoan - a complete organism in which all life activities are carried on within

PROTISTS - . the “little guys”. a diverse kingdom. but… there are some general characteristics they all share:.

Protists - . characteristics:. eukaryotic mostly unicellular may be plant-like, animal-like, or fungus-like in mode of

THE PROTOZOA - . unicellular - eucaryotic microorganisms found in the kingdom protista no common basic structure, size or

LEISHMANIASIS - . leishmaniae are protozoans transmitted to humans by insect bites and cause a spectrum of clinical

The Parasites of Medical Importance - 2. parasitology. the study of eucaryotic parasites, protozoa and helminthscause 20%