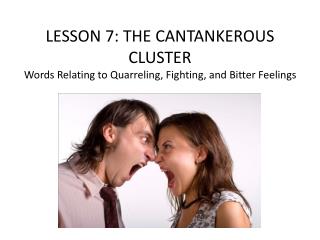 LESSON 7 : THE CANTANKEROUS CLUSTER Words Relating to Quarreling, Fighting, and Bitter Feelings. Animosity. Vince no longer felt any animosity toward his sister after she apologized to him. The animosity between the North and the South led to the American Civil War.