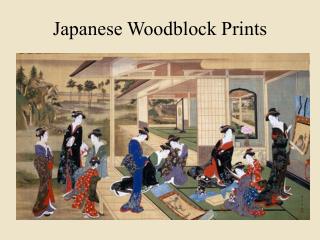 Japanese Woodblock Prints. Ancient Roots. Woodblock prints were first used in Japan around 700 AD. The technique was brought to Japan by Chinese Buddhist monks. The original works, like the one pictured above, were religious text. Buddha is depicted with a halo in this work. Technique.

Linoleum Block Prints - . art b ms. filiaga. day 1 bell work. what is a linoleum( lino ) block(guess)? what could you do,

Create a Simulated Woodblock Print - . a kabuki actor as the bandit shiro in falling snow, from the play five courageous

Linoleum Block Prints - . art b ms. filiaga. day 1 bell work . what is a linoleum( lino ) block(guess)? what could you

Carbon prints - . a carbon footprint is an amount of green houses gases that are emitted from an individual, such as

Developing Latent Prints - . developing a print requires substances that interact with secretions that cause the print to

Linoleum Prints - Linoleum printing is defined as. a printmaking technique, a variant of woodcut in which a sheet of

Canvas Prints - Welcome to canvaschamp - the champion in canvas printing. we are experts at helping you preserve your