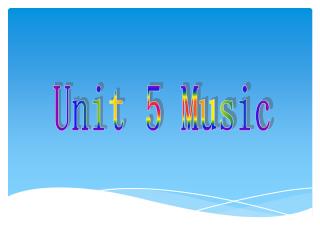 Unit XXV – The New Music - . chapter 79 technology and music. the technological revolution. electronic music the most

The Enjoyment of Music 10 th Shorter Edition - . part three more materials of music. “all music is nothing more than a

Unit 1 - . developing effective communication in health and social care. music is a great way of communicating and people

Music in Your World - . music appreciation. unit summary. throughout the course of this unit, students will learn about

Music of Latin America - . “ ¡viva méxico! ”. in this unit, we will…. explore the geography of areas with latin

Higher Early Music - . renaissance a style of music from the period from about 1450 to 1600, i.e. pre baroque. before

Unit 5 Music - . warming up and reading 陕西宝鸡长岭中学 孙烈红. do you like listening to music?. do you like