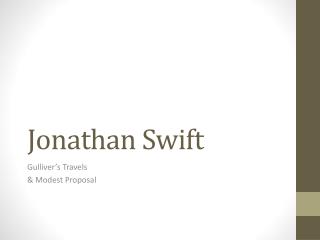 Jonathan Swift. Gulliver’s Travels & Modest Proposal. Jonathan Swift. Generally thought to be the greatest prose writer of the 18 th century One of the world’s finest satirists Considered a misanthrope by many because he was deeply critical of humanity. Jonathan Swift.

WELCOME to SWIFT CO.,LTD. - Welcome to swift co.,ltd. background. established in 1986 as swift company. company is run by

SWIFT FOR TRADE - September 2007, bangladesh. swift for trade. contents. what is swift what is bke swift message /

Jonathan Swift - . “satire is a glass wherein beholders generally discover everybody's face but their own, which is