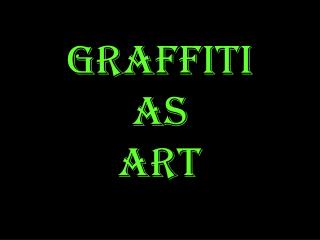 GRAFFITI as ART. In art history “graffiti” refers to the inscriptions, figures drawing, etc. found on the walls of ancient ruins, as in the Catacombs of Rome or at Pompeii. Graffiti As Art - . the name itself becomes symbolic of an identity. every graffiti artist has their own tag name and

Art: Graffiti - . by: angela yuhas , edson rivera, and araceli palacios. objective: to learn how to draw your name in

Is Graffiti “Art”? - . have you ever heard of “street art?”. is street art and graffiti the same thing?. check

Graffiti: Art or Annoyance : - Jason brando is an artist. his work is controversial- not because of its subject but

Graffiti: Art or Crime? - . what is graffiti ?. when people draw on walls or other property without permission.

NEW YORK: Graffiti Art - . graffiti began in new york city in the 1960’s. but is graffiti art? -it’s bright and

Graffiti, Printmaking, and Stencil Art - . printmaking -the art or technique of making prints, esp. as practiced in

Graffiti as Protest in Cairo - . graffiti celebrating a “ victory ” of the revolution, specifically the ousting

Graffiti - . a controversial art form. by jane mashburn. start. so, what’s this all

Graffiti: a work of art or vandalism? - . graffiti represents an art form that is unrestricted, one that rebels against