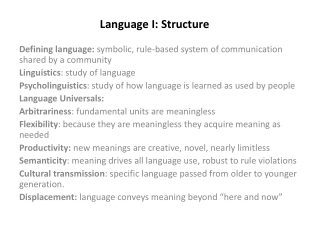 IB English Language and Literature - . language and power. objective. analyse how audience and purpose affect the

Language - . turning thoughts into words. what is language?. language consists of symbols that convey meaning, plus

Aspects of Language - According to linguists, there are three key aspects of language: form meaning use. aspects of

Syntax - . why is the structure of language (syntax) important? how do we represent syntax? what does an example grammar

Staircase Parallel (Chiasm) Structure of Gen 11:1-9 A: All the earth had one language (v. 1) - Asscending a rebuilt

History of the English Language - . language terminology. linguistics: the study of the nature and structure of language