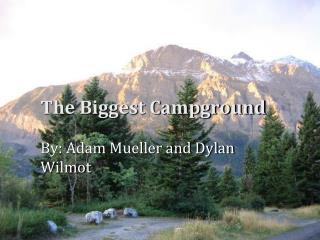 The Biggest Campground. By: Adam Mueller and Dylan Wilmot. Introduction. Campground Management Software - Looking for an all-in-one solution for managing campgrounds. here at tipi.camp we offer

Important Items For The Campground Store - A campground store is a place where campers can come to ask questions, get

5 Tips For Choosing The Perfect Campground - Camping is fun; it's thrilling and serves as a temporary escape from this

MAKING THE BIGGEST DIFFERENCE - . using evaluative thinking to get the most out of your project. what will we do today?.