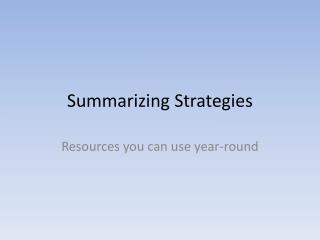 Summarizing Strategies. Resources you can use year-round. Selective Underlining. Underline what is important Try to recall what you underlined Only look back if you are stumped. Underline the key ideas.

Marzano’s Essential 9 High Leverage Instructional Strategies - . objectives. by the end of the session you will...