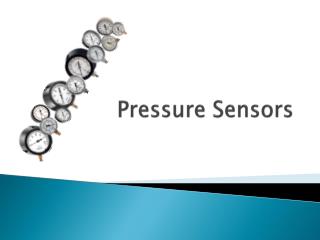 Pressure Sensors. Basics of pressure. Pressure is defined as a force per unit area, and can be measured in units such as psi (pounds per square inch), inches of water, millimeters of mercury, Pascal (Pa, or N/m²) or bar. Until the introduction of SI units, the 'bar' was quite common. Pressure Sensors - . absolute – a sensor that measures input pressure in relation to a zero pressure. we will use the

PRESSURE SENSORS - . pressure. pressure is an expression of the force required to stop a fluid from expanding, and is

Pressure Sensors (cont’d) - . sensors measure pressure and temperature at different points in the system. even a simple

Automotive Pressure Sensors Market - The automotive pressure sensors market is valued at usd 3.68 billion in 2016 and is