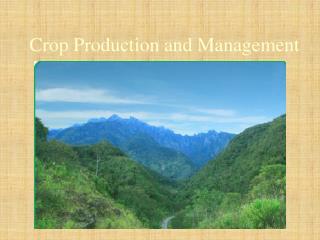 Crop Production and Management. What is crop?. When plants of the same kind are grown and cultivated at one place on a large scale, it is called a crop . For example, crop of wheat means that all the plants grown in a field are that of wheat. Cropping Pattern. CROP PRODUCTION AND MANAGEMENT - . the term crop is used to describe plants of the same kind that are grown in

Soil Suitability and management for crop production - . end. previous. next.

Drainage Management for Crop Production and Water Quality Benefits - . a cooperative effort of the: natural resources

Crop management - . water management soil and nutrients pests and diseases. the essential elements for rice. there are 16