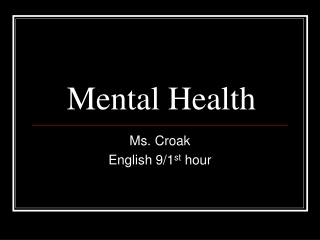 Mental Health. Ms. Croak English 9/1 st hour. Background. Mental Health 1.  A state of emotional and psychological well-being in which an individual is able to use his or her cognitive and emotional capabilities, function in society, and meet the ordinary demands of everyday life. How to not be perfect - . taking care of yourself . it’s okay to…. leave the room stand in the back of the room play

Building a recovery-oriented mental health system: The perspective of the Mental Health Coalition of SA - What is the

Mental Health and the Schools - . john yasenchak, ed.d . husson university. what is mental health?. when people here the

What is mental health? - . “mental health refers to a broad array of activities directly or indirectly related to the

Topic 2-2 Your Mental Health - . in this topic, you will study the factors that affect mental health, as well as