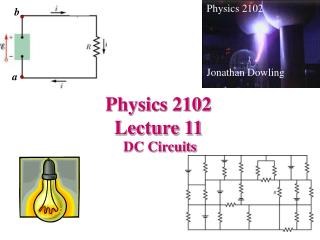 Physics 2102 Jonathan Dowling. b. a. Physics 2102 Lecture 11. DC Circuits. Incandescent light bulbs. Which light bulb has a smaller resistance: a 60W, or a 100W one? Is the resistance of a light bulb different when it is on and off? The Early College @ Center Grove A Smaller Learning Community 1:1 Laptop Initiative - . what is the early college at