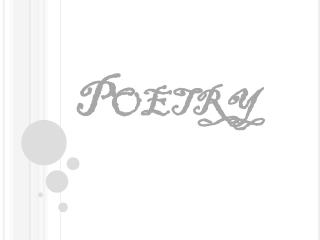 Poetry. POEMS:. Personal Poem I Am Poem If Only Bio—About Yourself Bio Pyramid (2)—About Someone You Admire Limerick (3) Acrostic (3) Haiku (3) Tanka/Cinquain (3) Diamante Free Verse. Unit Project.

Poetry - . by: daud , bradley, grace, liana. or on the skateboard. the sidewalk racer. most people don’t sail on

Poetry - . cumberland, junior gr. 7. concrete poems. poem that: forms a picture of the topic follows contours of a shape

Poetry - . poetry is all about 5 things…. expression observation ideas emotions words and opinions. the way a poem

Poetry - . english 10. how to read poetry. read a poem slooooowwwwwlllllyyyyy . people try to read fast and miss the

Poetry - . definition of poetry. a collection of words that express an emotion or idea. hey, diddle, diddle, the cat and