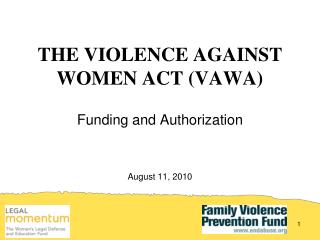 THE VIOLENCE AGAINST WOMEN ACT (VAWA) THE VIOLENCE AGAINST WOMEN ACT (VAWA)

Violence Against Women - . percentage of women who reported having experienced physical or sexual violence or both at

Violence against women - . a feminish presentation created by edoxie allier , christian ludt and gabriel morantes. a

VIOLENCE against WOMEN: - . its scope and relevance for the church today. women’s ministries department general

Protection of Women Against Domestic Violence Act, 2005 - . hailed as representing a watershed for indian women's