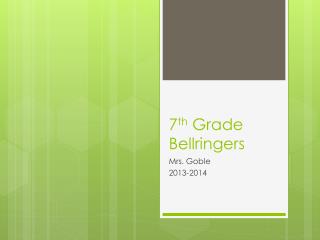 Bellringer - . move your desks into groups of four please take out your outline for the outline quiz! if you finish the

To, Too, or Two Bellringers - . bellringer. instructions: write the following sentences and then fill in the blanks with

Social studies Bell Ringers Week 8 - . create a new word or google doc. make sure you put your heading on the document