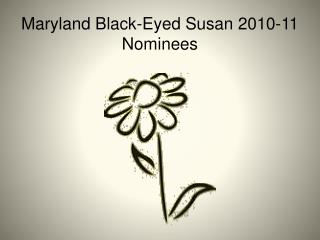 SNAPSHOT DAY One Day in the Life of Maryland Libraries - . october 5, 2010. snapshot day public library relaxation at the

The Maryland Advance - . kevin s. burke april 2008 day 1. who are we?. what are the challenges maryland courts face?.

Media specialists and other lovers of Black-Eyed Susan books,

An Initiative for the State of Maryland - For counselors, intake workers and screeners, social workers, and therapists

Sex and the Superbug: Next Steps in Dealing with Multi-drug Resistant Gonorrhea in Maryland - . jafar h. razeq , phd,