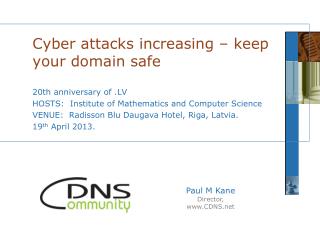 Making Your House Safe From Zombie Attacks - Defining grizzly bear graphs. we represent the house by a graph. ... you get

Making Your House Safe From Zombie Attacks - . jim belk and maria belk. how can we construct a house so that we can

How to Keep Your Smartphone Safe - . in the news. mcafee threats report: fourth quarter2010 report, revealing a steady

Physical and Cyber Attacks - . inspirational quote. country in which there are precipitous cliffs with torrents running

Keep-Safe Box - . stephen and michael. keep-safe box. we think you will like the keep safe box because it keeps your

KEEP YOUR COMPUTE SAFE - . and how to fix it. objective . keep your computer safe. -not about spam, phishing or browser