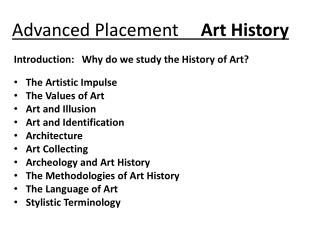 Advanced Placement Art History. Introduction : Why do we study the History of Art? The Artistic Impulse The Values of Art Art and Illusion Art and Identification Architecture Art Collecting Archeology and Art History The Methodologies of Art History The Language of Art

Advanced Placement - . 2013-2014. grades in ap will not be weighted , please clarify this to your students after may ,

Welcome to Advanced Placement US History! - . why should we study history?. because it is interesting. where else can you

Advanced PLacement - . wcpss. what is the purpose of an ap course?. think critically and deeply about a content area