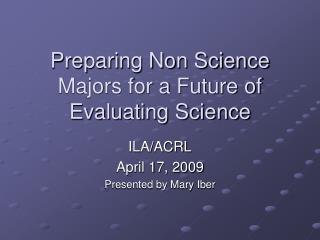 Preparing Non Science Majors for a Future of Evaluating Science

Preparing Non Science Majors for a Future of Evaluating Science

Science on a Sphere Evaluation at the Science Museum of Minnesota - . kirsten ellenbogen, ph.d., director of evaluation

Dept. of Computer Science &amp; Engineering - . prepared and presented by : vince paul head of the department.

Strategies for Success: Preparing for a Career in ocean science and technology - . deidre sullivan. director marine

PRE-HEALTH 101: Basic Information for New Pre-health Students - . an overview and discussion of preparation for common

A Reflective Practitioner's Perspective on Computer Science Teacher Preparation - . 1 department of education in