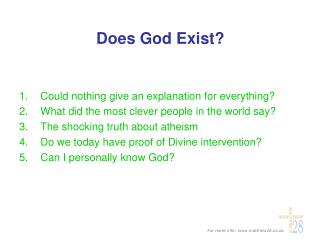 Does God Exist? - . week 1. what do we believe?. step 1: once you have interviewed 10 people put the information into a

Does evil exist? - . a university professor challenged his students with this question: “did god create everything that

DOES GOD EXIST? - . in asking, “does god exist?” we must first ask what this question means. in context we mean,

Does God exist and why does it matter? - . neil shenvi duke intervarsity 7/13/12. talk outline. which god? does god

DOES GOD EXIST? - . in asking, “does god exist?” we must first ask what this question means. for christians, the most

Does Poverty Exist - . in latin america? in north america? in africa ? in asia ? and in……(fill in the blank, please)

Does God Exist? - . “evolution is a fact” (…or so they would have you believe!). evolution &amp; christianity:

Does God Exist? - . nature of god. the four qualities of god (for our purposes): omnipotent (all powerful) omniscient

Does God Exist ? - . are scriptures the words of god ?. a sadhu. person going for an interview. person performing pooja