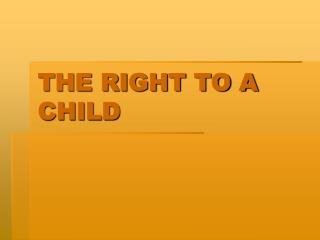 THE RIGHT TO A CHILD. INTRODUCTION. The first test-tube baby, Louise Brown , was born on 25 July 1978 at Oldham and District General Hospital. The consultant PATRICK STEPTOE was part of the team that developed in vitro fertilisation (IVF) . A Few Housekeeping Notes - . q&amp;a time will follow presentation during the presentation, use the chat box in webex

THE EFFECTS OF GLOBALIZATION ON POVERTY AND CHILD LABOR - . alicia menendez the university of chicago june 23, 2009.

CHILD ABUSE REPORTING - Poms and associates. the law nmsa 32a-4-3. any personacting in an official capacity who knows or

Child Birth in America- A Brief Focus on Various Advantages - Good parenting is the ultimate gift for your child! who

Child Abuse and - . neglect. child-. every human being below the age of 18 years unless under the law applicable to the

Child Soldiers - . dr supriya akerkar. in this lecture. why are child soldiers a development issue? understand the

Child Labor - . by: sam mcdonald. introduction- what is child labor?. the dictionary defines child labor as the

Child Abuse Unit 5 Child Development - . what is child abuse? . child abuse is any form of physical, mental or emotional