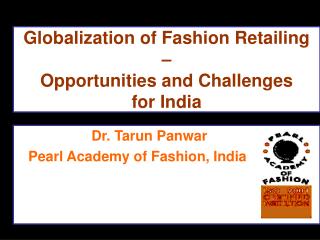 Globalization of Fashion Retailing – Opportunities and Challenges for India Globalization of Fashion Retailing – Opportunities and Challenges for India

Slide 17-1 - . c hapter. retailing. slide 17-2. after reading this chapter you should be able to:. identify retailers in

What Are We Learning Today? - . 2.1 recognize and appreciate historical and contemporary consequences of european

Fashion and you - . how often do you go shopping?. fashion and you?. once a week. once a month. once a quarter. for what

Globalization and challenges to secondary education - . dr.y.josephine yjosephine@nuepa.org. 1. what is globalisation.