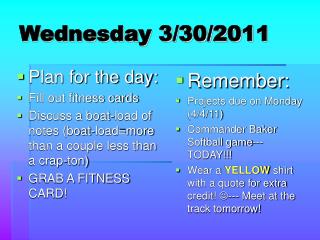 Plan for the day: Fill out fitness cards Discuss a boat-load of notes (boat-load=more than a couple less than a crap-ton) GRAB A FITNESS CARD!. Remember: Projects due on Monday (4/4/11) Commander Baker Softball game--- TODAY!!!

SoE 2011 – Overview - . this presentation was developed as one of several australia state of the environment 2011 (soe