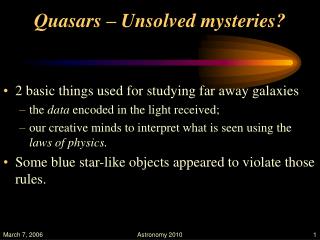 Quasars – Unsolved mysteries?. 2 basic things used for studying far away galaxies the data encoded in the light received; our creative minds to interpret what is seen using the laws of physics. Some blue star-like objects appeared to violate those rules. . Discovery of Quasars.