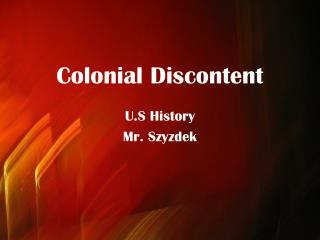 Colonial Discontent. U.S History Mr. Szyzdek. Wars of Empire. France, Britain, Spain and the Netherlands were the major players in colonization throughout the world. In North America, Britain's greatest rival was France.

CHAPTER 21 DISCONTENT AND EXPERIMENTATION - . “the only thing necessary for the triumph of evil is for good men to do

Colonial Trades - . introduction. in colonial times there were no factories and everything had to be hand made. each

The American Revolution - . the colonies fight for their rights. main idea tensions between britain and its american

Workers’ Discontent and Progressive Era pressure - . the problems of inequalities in the gilded age, led to widespread

Colonial Willamsburg - . life, government, and culture mac bailey. laws in colonial times . women/man in their 20s had to

Colonial Cooking - . it’s time to eat. by kathy snyder. the colonial pantry. everyone who arrived during the early

American Revolution/ French Revolution - . unit 1: essential question #2 how did the principles and philosophies of the