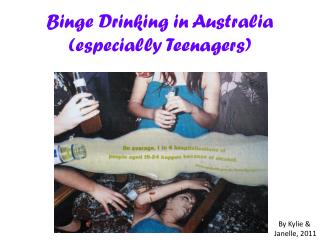 Binge Drinking in Australia (especially Teenagers). By Kylie & Janelle, 2011. Alcohol. In everyday use, alcohol usually refers to beer, wine or spirits containing ethyl alcohol- a substance that can cause drunkenness, and changes in consciousness, mood and emotions .

Save on Your Motorhome Hire in NZ! - Looking for affordable motorhome hire in nz to save some money? you can do that with

China Tourism in Australia Report and Strategy for Growth. - In this jam packed report, you will uncover: 1.what do

The Hottest, Best, Most Popular Christmas Gifts for Teenagers in 2015 - Http://mohrpublicity.com/ the hottest, best,

Crucial Steps for Choosing Your Wedding Caterer - Having a great catering service for your wedding is important, check

Do You Really Need to Use Boat Lifts in Australia? - Understanding the purpose of a boat lift, and why it can, in fact,