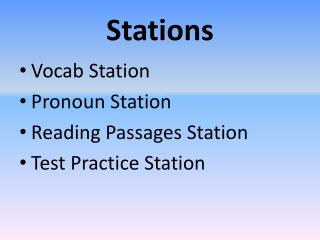 60s radio stations - The 60s refers to the years of the beginning of lovely music. however, the term also refers to an

Scriptural Stations of the Cross - . as celebrated by pope john paul ii on good friday 1991. the 1 st station: jesus in

Stations of the Cross - . reflection questions. stations 1 and 2. station 1: has anyone ever said mean or hurtful things

Interactive Stations - . ap literture. what is our purpose?. to examine how a central idea/theme develops over the course

Stations - . travel to three different stations and spend 12 minutes at each one. questions to answer in addition to ones

Stations of the cross - . via crucis. opening devotions. in the name of the father, and of the son, and of the holy