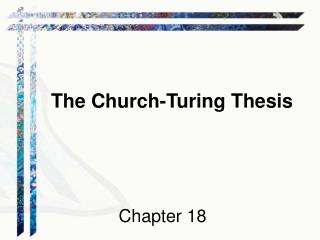 The Church-Turing Thesis. Chapter 18. Can We Do Better?. FSM  PDA  Turing machine Is this the end of the line? There are still problems we cannot solve: ● There is a countably infinite number of Turing machines since we can lexicographically enumerate all the strings

Chapter 11: Theory - . computer science has identified a number of theoretical ideas regarding what computers can and Turing machines - . chapter 4, smith and kimber. a turing machine is an abstraction of a human “computer”. consists

Polynomial Church-Turing thesis - . a decision problem can be solved in polynomial time by using a reasonable sequential

Quantum Computation - Stephen jordan. quantum computation. church-turing thesis. weak form: anything we would regard as

Turing-Church Thesis and Incomputability - . in which a few things really do not compute. integer roots of polynomials.

The Church-Turing Thesis - . lecture by h. munoz-avila. we have the notion of turing machines. transitions: (( p , 

The Church-Turing Thesis - . chapter 18. are we done?. fsm  pda  turing machine is this the end of the line? there

Turing’s Legacy - . minds &amp; machines. alan turing. “i believe that in about fifty years’ time it will be

The Church-Turing Thesis is a Pseudo-proposition - . mark hogarth wolfson college, cambridge. will you please stop