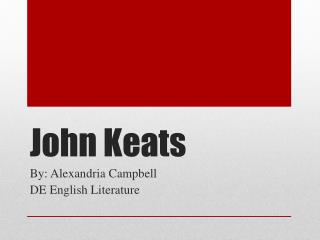 On the Grasshopper and the Cricket - . john keats. presentation by: emad masroor hashir shahid faaris khan. the poetry

On the Grasshopper and the Cricket By John Keats

By John Keats - Ode to a nightingale. by john keats. my heart aches, and a drowsy numbness pains my sense, as though of

John Keats - . mortality, love and beauty. &quot;here lies one whose name was writ in water.&quot; . outline.