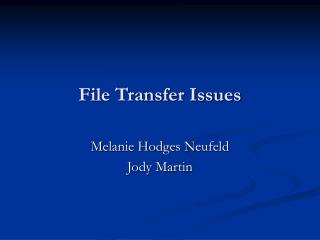 FILE TRANSFER PROTOCOL - . definition. short for file transfer protocol, the protocol for exchanging files over the

An analysis of data transfer issues From GRIF‐LAL and IN2P3‐LPC to TOKYO - . tomoaki nakamura icepp , university of

FILE 9: YOUR Dream Job - . more and more people are looking for a job that offers fulfillment and satisfaction. now a