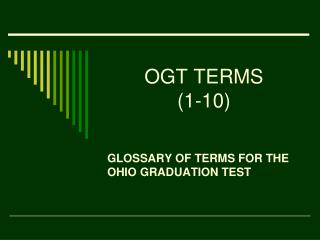 OGT TERMS (1-10). GLOSSARY OF TERMS FOR THE OHIO GRADUATION TEST. ABSOLUTE MONARCHY. A government totally controlled by a hereditary ruler, whose commands are law. (133). One way absolute monarchies are similar to dictatorships is that citizens under both systems of government typically

Define the following terms: - Nutrition how the body uses food to maintain health. nutrient something found in food that

CULINARY TERMS - . ellie pribble, rn. a small green chile, which becomes ripe when there are streaks of white.  the heat

Chapter 2: Terms Pertaining to the Body as a Whole - . in this chapter you will. define terms that apply to the

Medical Terminology Basics - . chapter 1. health care workers need to know many medical terms in order to do their jobs

Week 6 Journal 23 - . pick up a journal sheet. you were handed a worksheet as you entered the room today. these are slang

AP TERMS - . language and composition by capt. paynter. the repetition of the same word or phrase at the beginning of a