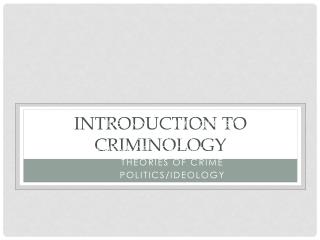 UNIVERSITY OF NAIROBI SCHOOL OF LAW GPR 200 CRIMINOLOGY AND PENOLOGY - . 1. this course has three main elements: §

CRIMINOLOGY - . chapter 9. the relativist definition of crime and deviance the imposition of the deviant label the

WHAT CAN I DO WITH A MAJOR IN... CRIMINOLOGY &amp; CRIMINAL JUSTICE - . www.sc.edu/career. crim·i·nol·o·gy . the

Criminology – Female Criminality - . before the intervention of feminism, the disciplines of criminology and sociology