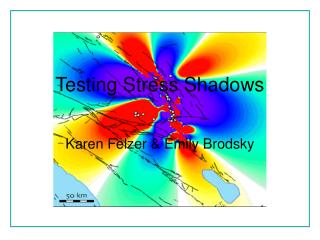 Testing Stress Shadows. Karen Felzer & Emily Brodsky. If earthquake triggering is caused by static stress change, we should see stress shadows as well as zones of seismicity rate increase. Do we actually see these shadows?. Previous work on Stress Shadows.

Shadows - . objective: create an image that is primarily about shadows. you may show the source of the shadows, or not.

STRESS TESTING CASE STUDY - . the process of stress testing is designed to determine the viability of an institution’s

Shadows - . life is full of light and shadow o the joy and o the sorrow o the sorrow. and yet will he bring dark to light

Shadows - . shadows. shadows- areas light cannot reach due to an opaque object in light’s path. there are two parts to

Shadows - . shadows occur when light shines on an object and the light does not pass through. (opaque objects). as earth

Shadows - . on a sunny day, stand with your back to the sun. because the sun cannot shine through you, your body will

Shadows - . what does peter pan and phil the ground hog have in

Cardiac Stress Testing - . what is a stress test?. a progressive graded test that reproduces diagnostic, prognostic, and

Diagnostic Stress Testing - Why do we stress test?. to evaluate patients symptomsto monitor patency of vessels in