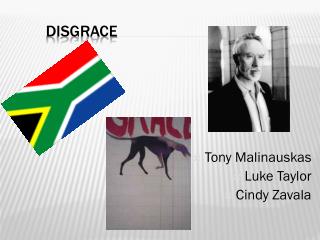 MORAL IMPLICATIONS IN THE FALL OF NATIONS - . “righteousness exalts a nation, but sin is a disgrace to any people”

BUT YOU LOVE ME DADDY - . sung by jim reeves and steve moore words and music by kathryn twitty (recorded october 15, 1959

The Gilded Age Child Labor in America - . child labor: the lucky ones. child labor was a national disgrace during the

We will rock you - . buddy you a white boy carrying a burden gonna be a big white man someday you got something on your

Coetzee and Laurie, Intertwined - . the similarities and parallels between coetzee and laurie. a time of disgrace. where

Prayer Purpose Preparation Perseverance - . nehemiah 1:3-4, 6, 11. they said to me, “those who survived the exile and

Stigmatisation and Barriers to Recovery - . charlie lloyd health sciences university of york. what is stigmatisation?.

My Chapter 1 Vocab Words - . by zakaria watkins. asset . an advantage or source of strength newspaper editorials

Poignant - . poignant adjective 1. keenly distressing to the feelings: poignant regret. the verdict made everyone feel

Stigma - . stig·ma a mark of disgrace associated with a particular circumstance, quality, or person: &quot;the

Proverbs Be a Wise Guy for God - . the simple, the mocker and the fool. 1. reckless words pierce like a sword, but 2.