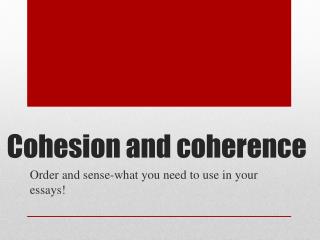 Cohesion and coherence. Order and sense-what you need to use in your essays!. The techniques and devices used to connect different parts of a text. They help the sentences of a text hang together so that the reader is able to ‘track’ the meaning. Cohesion and coherence - . dan, will &amp; xingxuan. outline of the class. warm-up activity definition of cohesion

Coherence &amp; Cohesion - . 語意連貫. 字句連貫. writing without these two devices is like making a

COHERENCE vs COHESION - English language unit 4. coherence vs cohesion. coherence. if a text communicates its message

COHERENCE AND COHESION IN WRITING - . coherence. a piece of writing is coherence if it is clearly organised and has a

Unity and Coherence - . unity means that a paragraph discusses one and only one main idea from the beginning to end.

Body Paragraphs Unity &amp; Coherence - . paragraph unity [sentences are unified to the topic] all sentences in