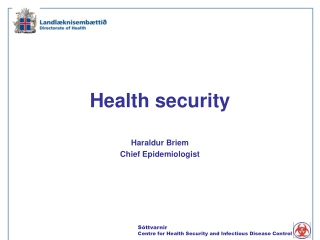 HIPAA Privacy &amp; Information Security - . overview. what is hipaa and why should i care? hipaa is the health

Health Safety Security - . how do we insure a healthy workforce ? how do we encourage employees to invest in their own

Lesson 7 Health, Safety and Security in the Bar - . best practices and policies to protect your customers and staff

SUSTAINABILITY: MEDICAID AND OTHER HEALTH INSURANCE - . mary b. tierney, m.d. september 25, 2003. other financing