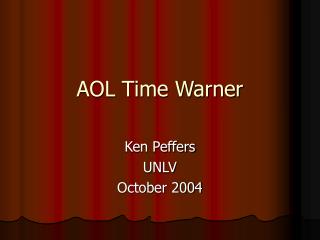 AOL Time Warner. Ken Peffers UNLV October 2004. Before the Merger. That's "C" for convergence, the buzzword of the year in the merger-happy days of 1999. AOL TIME WARNER - . a failure of synergy?. reasons for the merger in 2000. concentration of value : value of merger:

How To Time Warner Cable Email Login? - We consistently provide very excellent ehw email service for heaps of users. but