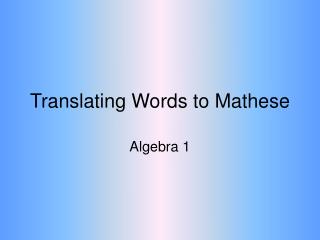 Translating Words to Mathese. Algebra 1. MATHESE (the language of math). Write all the terms that imply these operations. Addition Subtraction Multiplication Division. Is there a difference?. Translating Between Words and Math

Translating between words and math - . #5. in word problems, you may need to identify the action to translate words into

Translating between Words and Math - . by tom eheman. x minus 6 6 subtracted from x subtract 6 from x 6 less than x x

Translating Ideology - . what can we say about it and how can we investigate it? ian mason sichuan university, october

Translating Parabolas - . §5.3. by the end of today, you should be able to…. u se the vertex form of a quadratic

Translating Conditionals - . some more advanced issues: 1. ‘ only if ’ 2. necessary and sufficient

Translating Expressions - . beat the computer!. directions:. say the expression out loud before the computer gives

7 Translating Data to XML - . how to translate existing data formats to xml? (and why?) xw (xml wrapper) an &quot;xml

Translating from logic to automata - . (book: chapter 6). why translating?. want to write the specification in some

8 Translating Data to XML - . how to translate existing data formats to xml? (and why?) xw (xml wrapper) an &quot;xml