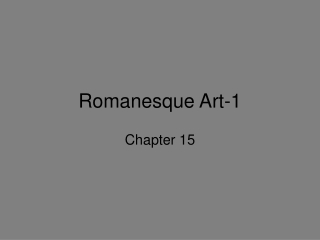 Romanesque Art - . expansion &amp; economic revival “build it (block by block) and they will come”. 1. the

ROMANESQUE ART - Appeared in the closing decades of the eleventh century among dramatic changes in europe. romanesque

Romanesque Art - . chapter 15. objectives. understand the major regions of europe in the romanesque period and be