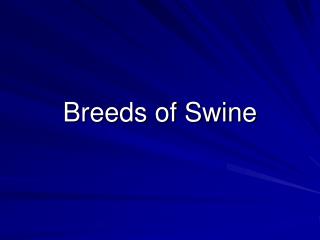 BREEDS OF SWINE - . by clint cummings. breeds of swine. nine most popular breeds in the u.s. berkshire chester duroc

Swine Management and Industry - . animal science level 2. unit map: follow along in your packet. what are you learning?

Identifying Breeds of Swine - . mrs. gilbreath. today you should be able to…. identify characteristics of major swine

Breeds Of Swine - . swine terminology. boar – a male pig not castrated that is used for breeding purposes. barrow – a

Breeds of Swine: An Introduction - . what will be learned?. first, we will be looking at some facts about swine

Swine Breeds - . large white. originated in england imported into almost every country of the world large litters with

Swine Breeds - . sus scrofa. some believe that pigs were the earliest animal to be domesticated, not the cat or dog.